Dear Customers, for orders posted within Australia, 10% GST will be added at check-out.

This year the ‘Southern Triples Rally’ for BSA Rocket Three and Triumph Trident riders was moved to South Australia at the request of several triple owners in SA. The previous four southern triples rallies were held in southern NSW to compliment the well-established and very popular northern NSW triples rallies organised by Col McAndrew in Ballina and now Evan’s Head.

So, it was that Gerry Rowley, Steve Cramp, Geoff Kemp and the Tri-Spark team got together to organise this Rally in the picturesque tourist town of Hahndorf in the Adelaide hills to promote the use and enjoyment of these machines. 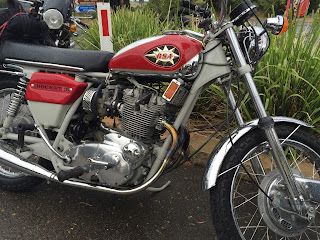 Many of the thirty or so entrants travelled from as far as New South Wales, Canberra, Queensland and Perth to get there (it is nearly 1200Km from Canberra). The venue was the Hahndorf Resort just south of the village with its fantastic hills vistas and excellent amenities. 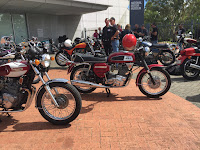 To kick things off we had a BBQ dinner in the camp kitchen, organised by Joanne Kelly. This was a very pleasant evening with balmy conditions and the casual surroundings were perfect for getting acquainted with fellow triplers. 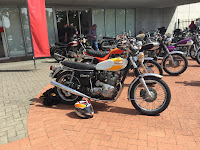 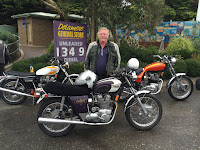 The presentation dinner on Saturday evening was at the restaurant in the Resort where we enjoyed a great meal and some thirst quenching after a great day of riding. The award presentations followed the meal with some noteworthy outcomes. Ian and David Wright (Brothers) won awards for their beautifully restored early T150 and T160. Paul Edwards won the best special for his Legend. Steve Mobbs won the Best BSA Rocket 3. The heroic Tim Tapsell won the ‘furthest traveled award’, well deserved for riding his T160 to and from Sydney! The award for best Hurricane went to Steve Cramp while the award for best Drum Brake Trident went to Ian Matthews, both of South Australia. 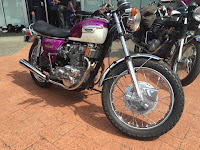 Many commented on the caliber of the bikes which are an absolute credit to their owner’s efforts to keep them up to this very high standard. Plans are already being discussed for a next triples rally event in Gunning NSW for 2018 and perhaps back to South Australia after that.